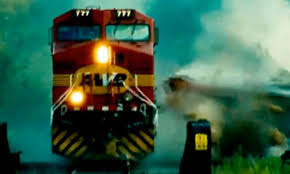 This is literally the worst possible metaphor for what is coming in terms of AI. First of all, why would you terrify people like this is some kind of unstoppable force that is going to crash into everything and cause chaos. Second, AI isn’t coming at us in some single linear fashion, so that we can just step of the tracks and let it go by. It’s coming at us from a lot of different directions.  And it’s not going by once a week to be ignored. Worst possible metaphor.

And how about this:

“Sand-shoe wearing billionaire entrepreneurs who are driven by profits are in no position to make up ethical rules that permit a machine to decide who dies in a car crash.

I have no idea what sand shoes are or why we are making fun of entrepreneurs. This is simply some sound-bite aimed at getting people hyped up over death risks that don’t exist.

“Technology, however advanced, will not be able to consider all the variables and make conscious ethical decisions in the same way a human would,” he said.

Really? Technology, however advanced, will not be able to consider all the variables a human would? Never ever? We’ll never ever use tech, to say, pilot a plane, like we do already? I call bullshit.

At least the Chief Scientist has come up with the idea of a “Turing stamp” (my idea about the Turing Test is better and I don’t even get paid by taxpayers for it). But honestly the whole posture this article leads to in approaching AI is, in my view, the worst way. It’s gets people panicky for no reason and doesn’t lead to any kind of useful regulation other than throwing your sabots in the machine. Good luck with that.